KaBoom! Built in a Day 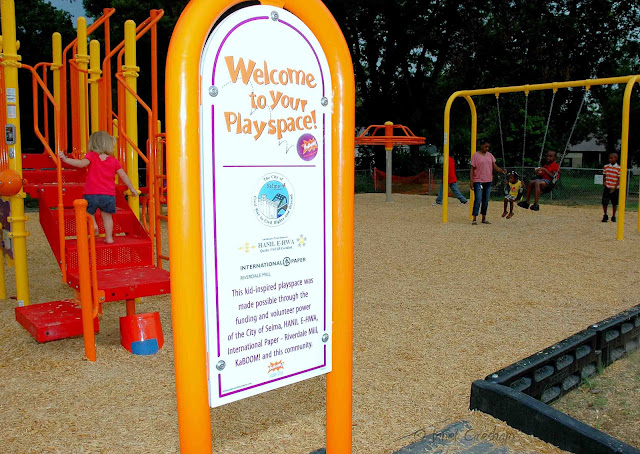 KaBoom! Here's the playground that was built in a day,
thanks to a national, non-profit organization
that is dedicated to saving play!

KaBOOM partnered with the City of Selma, Hanil E Ewa
and International Paper's Riverdale Mill, along with lots of volunteers,
to build this kid-inspired playspace in an East Selma neighborhood.
Already, the children are flocking to slide, swing and play on the gym sets.

Posted at Our World Tuesday
Posted by Janet at 5:00 AM 6 comments:

Here is yet another gator mount on display at the Central Alabama Farmers Cooperative
in Selma. These gators were caught during the 2011 West Central Alabama gator hunt,
and you can see them through August. Meanwhile, preparations are under way
for this year's hunt. Fifty tags are out, and the hunt runs for two weekends
in mid-August.

Alabama became the first state to protect alligators back in 1938,
but the reptiles increased in numbers enough that regulated,
small-scale hunts are needed to help manage their population.

P.S. This picture explains why I am not a river rat!
Posted by Janet at 5:55 AM 4 comments: 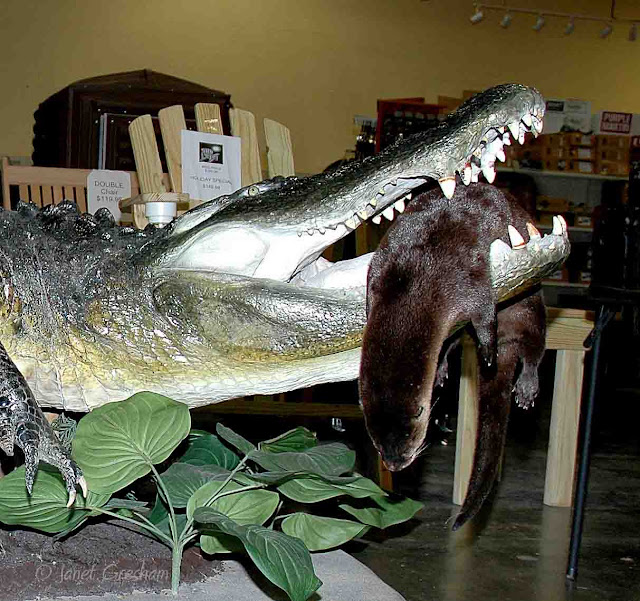 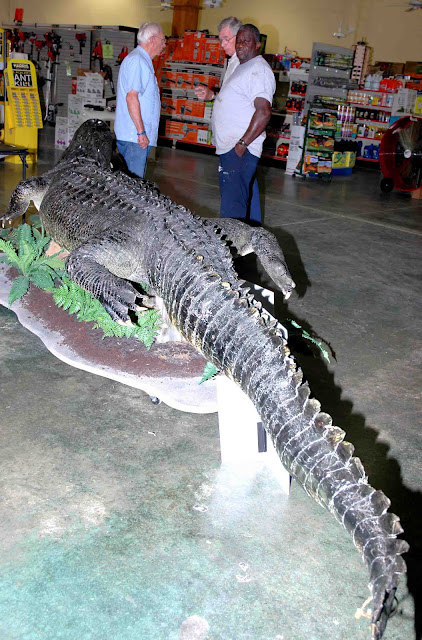 Forget the Loch Ness Monster. This beast is for real!
Who KNEW such huge reptiles swam in our river?
Until gator season began last year, I sure didn't!

The Fancher Gator, Alabama's state record at 14 feet, 2 inches and 838 pounds,
is attracting attention while on display at the Central Alabama Farmers Co-op
in Selma. The alligator was caught in the Alabama River in Wilcox County
last August by The Fancher Gator Team. Wildlife Images Taxidermy Studio
of Autaugaville mounted the reptile in a natural pose, snatching a river otter.

And now, it's about time for gator season to begin again!
I say, "Go get 'em!" 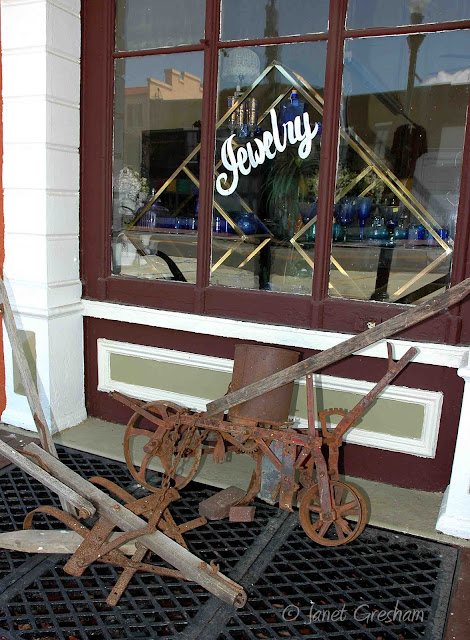 We're still out pickin' around Selma, and here's a place on Water Avenue.
So, do you prefer the well-worn relics on the sidewalk
or shiny blue bottles in the window?

Posted at Weekend Reflections
Posted by Janet at 7:15 AM 6 comments:

I Love Country and Animals 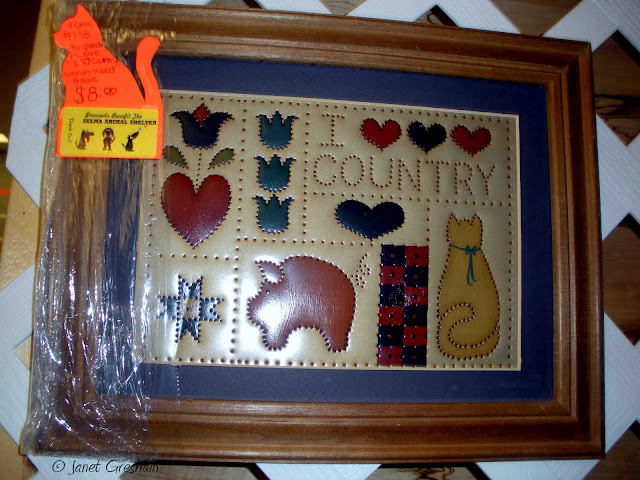 While country decor may not be as fashionable as it once was,
the person who buys this will help the Selma Animal Shelter.
Among booths at Junebugg's Flea and Antique Mall is one
that benefits cats and dogs that are looking for a furever home.

Posted at Rural Thursday
Posted by Janet at 5:00 AM 7 comments:

Bottle trees have made a comeback down here in the American South,
and whether they keep the haints at bay or not, they sure make a colorful addition
to yards and patios. This one, along with tons of other things,
was found at Junebugg's Flea Market and Antique Mall. Love that place!

Posted at ABC Wednesday for "The Letter B"
Posted by Janet at 12:31 PM 9 comments: 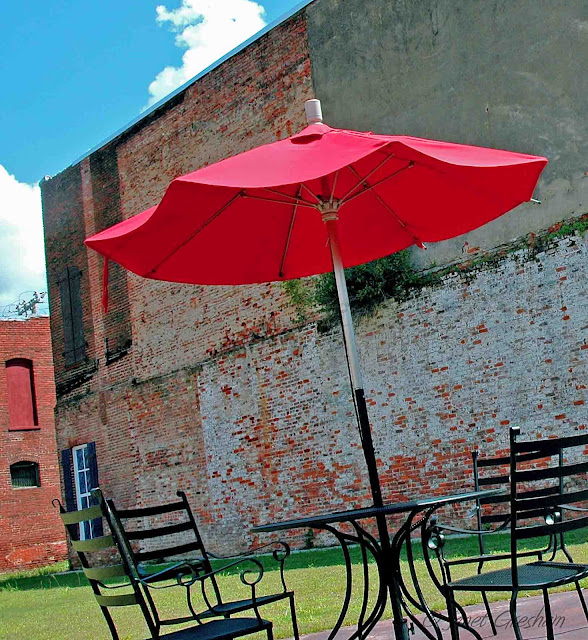 Midday shade is a scarce commodity downtown in July, and sometimes
you have to search for just the right spot and angle to catch it!
Phoenix Park on Water Avenue offers a solution!

Posted at Ruby Tuesday
Our World Tuesday
Posted by Janet at 8:38 AM 7 comments:

White crepe myrtles lend a soft yet showy touch to the streetscape
in front of the St. James Hotel on Water Avenue.

Boughs of crepe myrtle splash pink and green across a cottage in Old Town
for a mid-morning, blue-sky picture that is simply summer in Selma.

Posted at Skywatch Friday
Posted by Janet at 6:50 AM 6 comments: 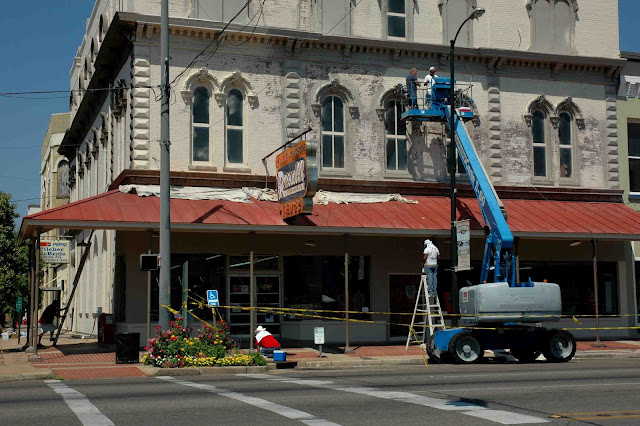 Pilcher-McBryde Drugstore on Broad Street recently got a facelift.
Notice the vintage Rexall sign that still hangs.
Posted by Janet at 10:40 AM No comments:

A is for Alabama and Auburn 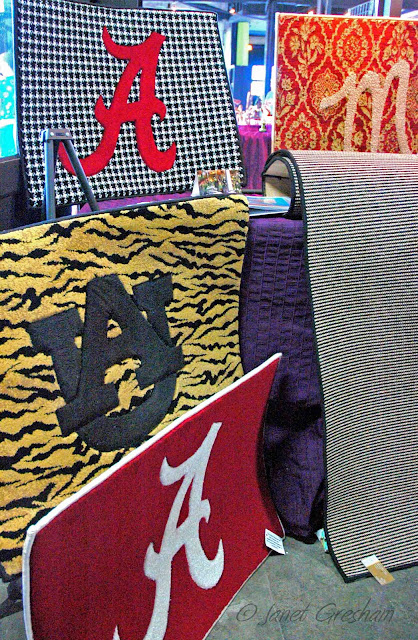 It's ABC Wednesday, and we start all over with "A." Around here,
"A" is easy to find on everything from shirts to mugs, key rings to jackets,
even rugs! Of course, they represent our state's two most famous universities,
Alabama and Auburn. Soon, the college crowd will be back on campus,
and I'll just bet some of them will be decorating their dorms and apartments
with Custom Carpets by K.D.

Posted at ABC Wednesday
Posted by Janet at 6:40 PM 7 comments: 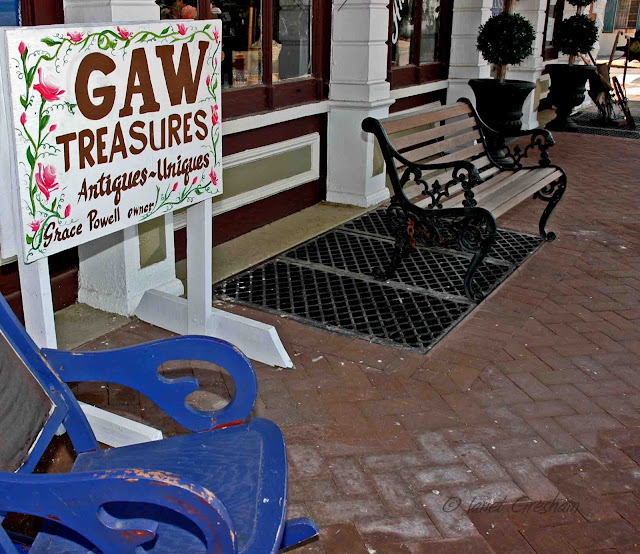 If you like antiques and uniques, here's another stop.
GAW Treasures is located in one of the historic buildings on Water Avenue.
Nice sign! 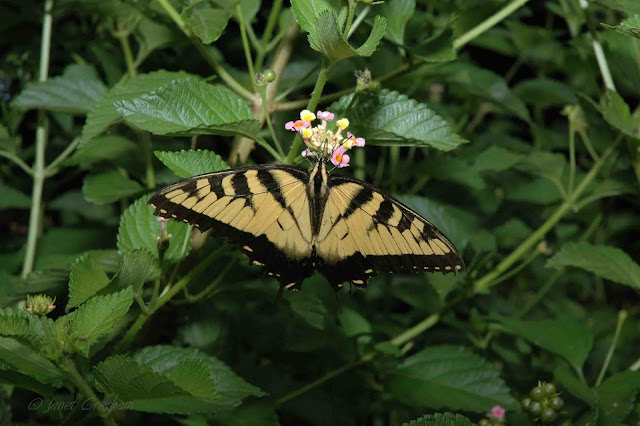 Selma is the Butterfly Capital of Alabama, and the Eastern Tiger Swallowtail
is its mascot.This one just lit on the prolific lantana that seems
to grow about as fast as kudzu!

It's the middle of summer in Riverfront Park; the sky is blue, and we're wearing humidity
like a jacket. But just across the bridge, around  the bend and up some steps
are restaurants with cool air and iced tea! 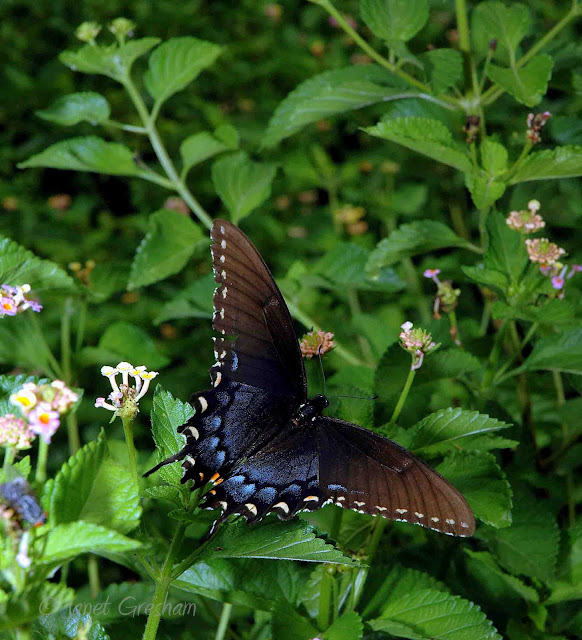 Butterflies are feasting on the lantana these days!

These black swallowtails are almost as common as the yellow ones,
and it's not too difficult to snap a photo of them in perfect pose.

ABC Wednesday, Z is for Zinnias

The ABC Wednesday meme has reached the end of the alphabet,
and since ABCs are short on Zzzzzzzzzzs, how lucky I am to have zinnias in my yard!
These little "paperwhite" miniatures are really showy once they
FINALLY start spreading, and with the drought, that took awhile this summer!
They only survived because I've spent more than I care to admit on water bills,
but rain three days in a row has truly made all the difference!

Posted at ABC Wednesday
Posted by Janet at 9:28 AM 10 comments:

About as Calm as a River Can Get 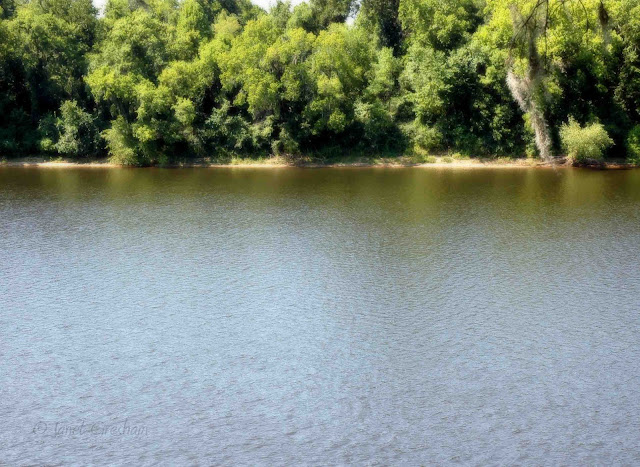 The Alabama River here was calm as could be last week.
Even the Spanish Moss, top right, hardly moved.
Alabama has lots of rivers, streams and lakes that
are used for both recreation and transportation.

Other Side of the Warehouse

Here is the other side of the warehouse from Sunday's post.
Can you tell what this place used to be?
If you look really, really closely, the white paint
once read "Selma Wholesale Grocery."
The "Grocery isn't in view in this photo though.
Posted by Janet at 12:30 PM No comments: 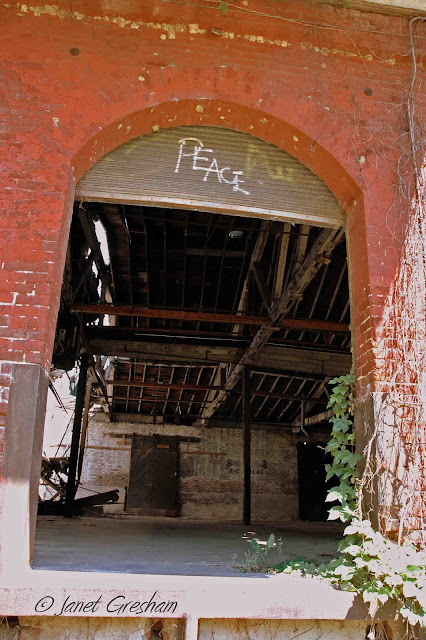 “Blessed are the peacemakers, for they will be called sons of God.”
(Matthew 5:9)

Down by the river,  scribbled on the door of  a deteriorating warehouse,
is the word "PEACE."
True, a place that is falling in doesn't look very peaceful, but it sure mirrors
the destructive forces in life and our hope for PEACE.

The verse, taken from "The Sermon on the Mount,"
is the seventh beatitude preached by Jesus. When I think of peacemakers,
I recall Sheriff Andy Taylor in "The Andy Griffith Show."
The TV sheriff was called upon to make peace time and again,
reconciling conflicts among the people of Mayberry.

Below is a clip from Andy's introduction as the sheriff
of Mayberry on "The Danny Thomas Show." 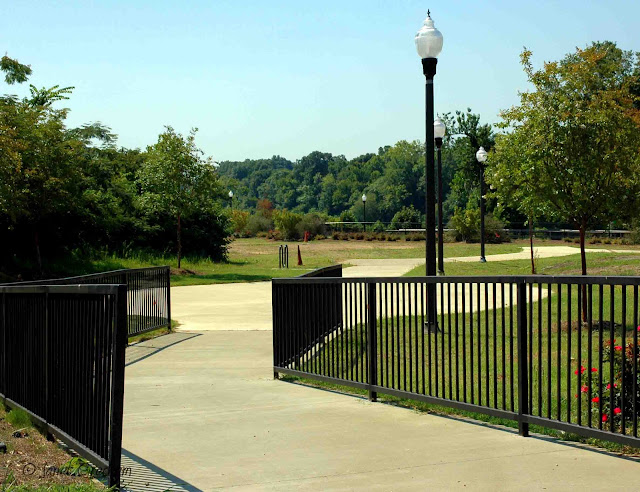 New paths are available for walking and biking in Riverfront Park.
Now, if the heat will just let everybody get outdoors!

The work goes on at Riverfront Park, including this new sign
above one of its entrances off Water Avenue. It seems to reflect
both the stifling summer heat and the gentle roll of the Alabama River.

Posted at Skywatch Friday
Posted by Janet at 4:21 AM 9 comments: 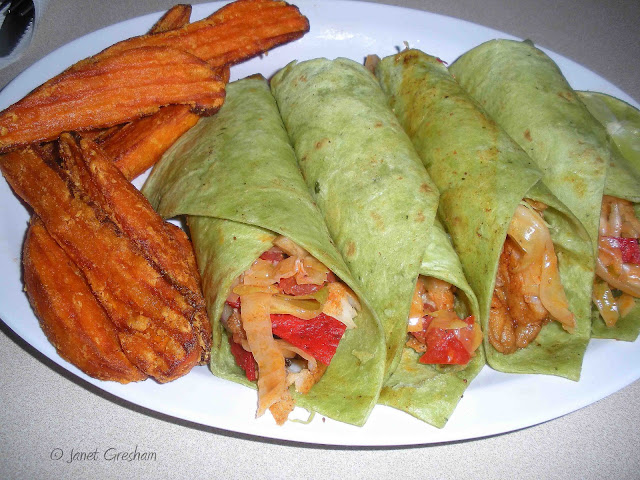 The Fourth of July barbecue is 'bout gone, and now I'm looking
for something different...like catfish tacos and sweet potato fries
down at Side Porch Sandwiches on Water Avenue.

Since this is the Year of Alabama Food, I'm posting this tasty dish
that is made with Alabama farm-raised catfish
(grown right here in the Black Belt)
to the Rural Thursday blog meme.
Posted by Janet at 10:10 AM 3 comments:

Patriotic Series, Y is for Y'all Come! 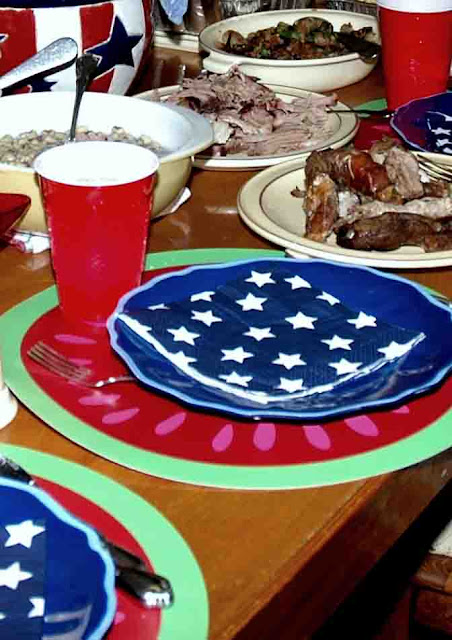 It's ABC Wednesday as well as the Fourth of July, and as we say here in the South,
"Y'all come!"
Our annual family spread included pork roast, pork ribs, barbecue chicken
and homegrown peas, okra, tomatoes, squash, cucumbers, zucchini
and green beans. The key lime pies came from Mark's Mart.
Happy Independence Day!
(Note: We're eating it all now before there's a tax passed for overeating!)

Posted at ABC Wednesday
Posted by Janet at 11:19 PM 4 comments:

"Oh, say can you see by the dawn's early light
What so proudly we hailed at the twilight's last gleaming?
Whose broad stripes and bright stars thru the perilous fight,
O'er the ramparts we watched were so gallantly streaming?
And the rocket's red glare, the bombs bursting in air,
Gave proof through the night that our flag was still there.
Oh, say does that star-spangled banner yet wave
O'er the land of the free and the home of the brave?"

The flag at Ella's Attic downtown may be the largest
indoor star-spangled banner in town!
It really takes your breath away upon entering the store.

"The Star-Spangled Banner" was written in 1814 by a lawyer, Francis Scott Key,
after he witnessed the battle of Fort McHenry in Chesapeake Bay
during the War of 1812. The poem later became our national anthem
and is notoriously difficult to sing, because its melody
spans one and a half octaves.

As America celebrates her birthday this week, I think this picture reflects the American
Dream. Our nation was founded on God-given rights and freedom from tyranny
so that its citizens might have the opportunity to pursue their dreams.
"Freedom is never more than one generation away from extinction.
We didn't pass it to our children in the bloodstream.
It must be fought for, protected, and handed on for them to do the same,
or one day we will spend our sunset years telling our children
and our children's children what it was once like in the United States
where men were free."
Ronald Reagan
40th president of US
Posted at Weekend Reflections