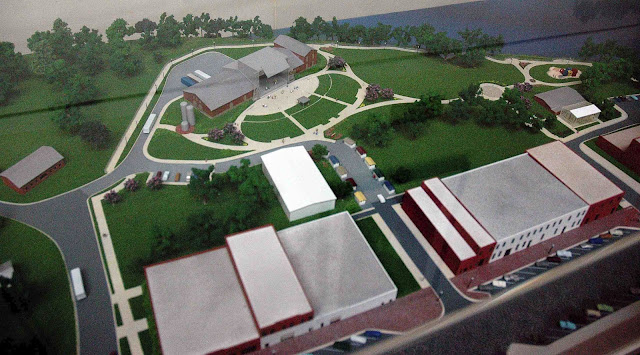 I've shown several photos of Riverfront Park and the riverwalk recently,
but here is the model for the whole project. At top is the old warehouse
that is under major renovation for the amphitheater.

Linking to Rurality and City Daily Photo Blogs
Posted by Janet at 5:00 AM 4 comments:

Getting Ready for Guests 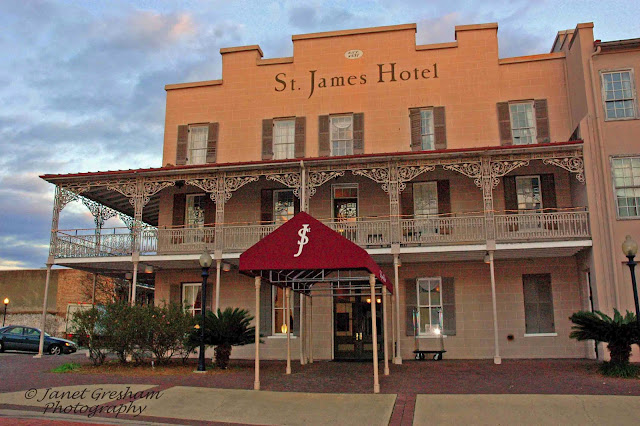 We're celebrating the letter G over at ABC Wednesday
as Selma hotels and motels GET ready for GUESTS
this weekend due to the annual Bridge Crossing Jubilee.

We hear that the vice president is coming, and if so,
then the national news media can't be far behind!

So, let's hope they don't GARBLE the truth about our town!
Back in 2000, when President Bill Clinton came for the 35th anniversary,
I read one article from an out-of-state writer who complained
that Selma's storefronts looked out of date...as if they
were from the previous century! Well, they ARE from the previous century,
and merchants worked hard back in the 1980s to remove
unattractive modern metal facades and return the buildings to their
original, architecturally beautiful appearances. 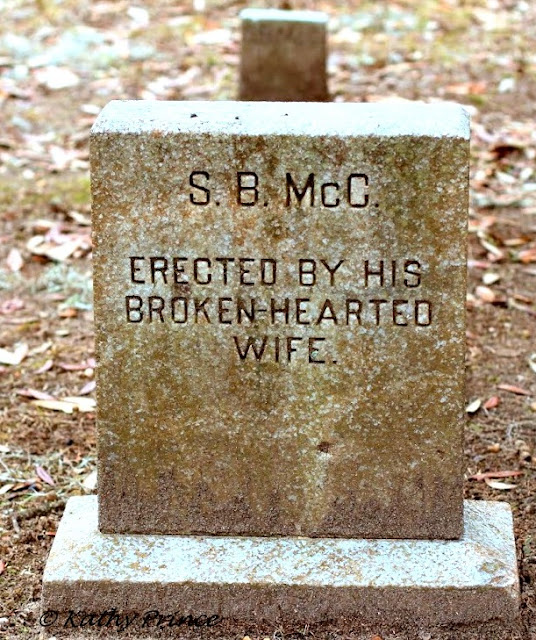 We don't know who S.B. McC. was, but this simple tombstone in
Confederate Circle at Old Live Oak Cemetery was erected
by his broken-hearted wife.

Thanks to guest photographer Kathy Prince for this photograph!

Linking to Taphophile Tragics, Our World Tuesday and City Daily Photo Blogs
Posted by Janet at 5:00 AM 17 comments: 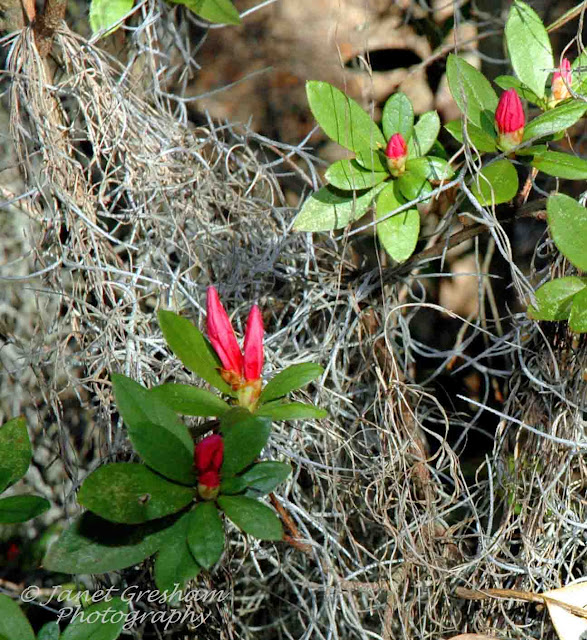 It's still a long way until Spring, but some of the azaleas
in Old Live Oak Cemetery just can't wait!

Linking to City Daily Photo Blogs
Posted by Janet at 5:00 AM 9 comments: 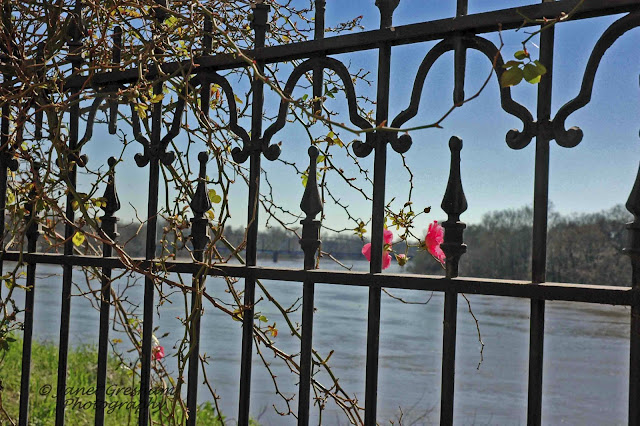 There's a touch of pink along the riverbank, thanks to the persistence
of these roses on the terrace behind the St. James Hotel.

Linking to Weekly Top Shot and City Daily Photo Blogs
Posted by Janet at 9:52 AM 5 comments:

Late Morning at the Riverwalk 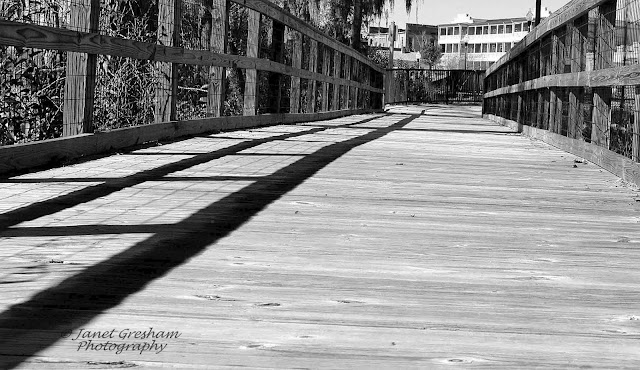 Shadows are bold along the riverwalk in late morning,
but I was thankful for a sunny day!
In the background on the high bank is the St. James Hotel.

Linking to The Weekend in Black and White,
Shadow Shot Sunday and City Daily Photo Blogs
Posted by Janet at 5:00 AM 15 comments: 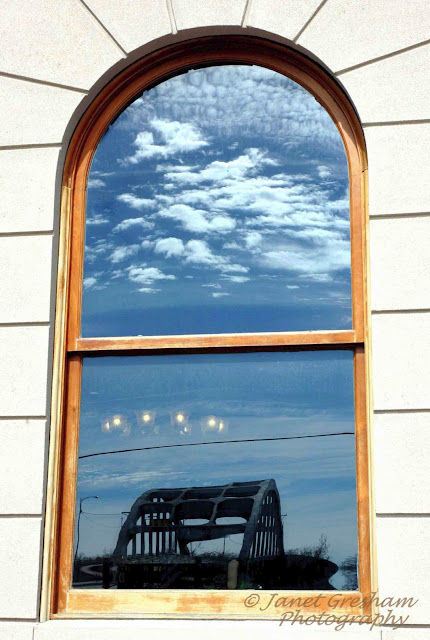 Here's yet another way to photograph the Edmund Pettus Bridge...its reflection
in the windows of the Selma Interpretive Center across the street.

Those bright clouds show up well as does an interior chandelier inside the lobby. 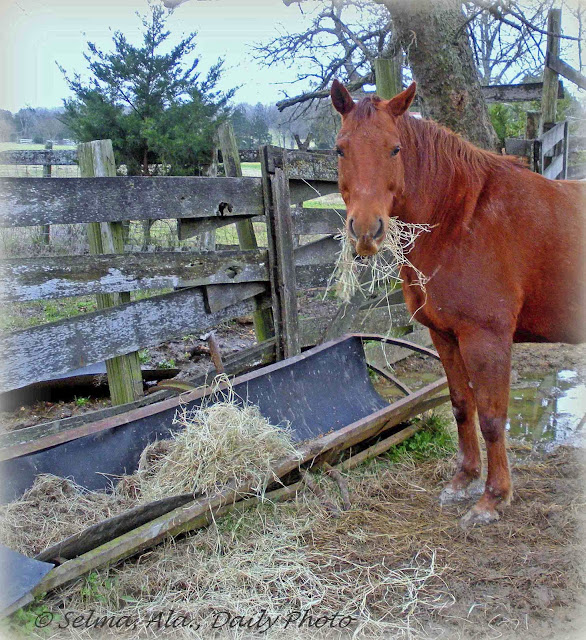 It's about a month away if the cows will quit breaking
through the fence to graze it before it's ready!

Work at the Old Warehouse 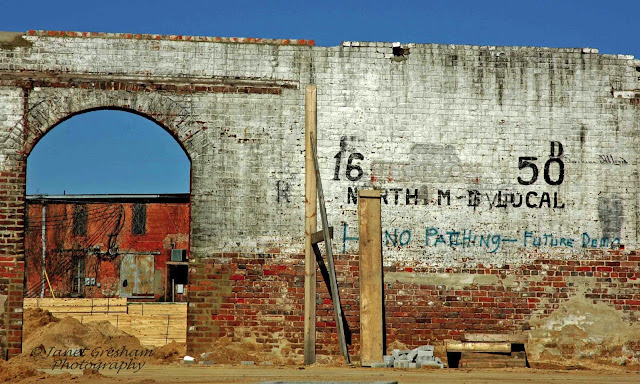 We're blogging the letter "F" this week over at ABC Wednesday,
and the FUTURE of this old warehouse came to mind.

Work progresses on the building, and someday in the FUTURE,
it will be part of the Riverfront Park Amphitheatre scheduled
for completion by early 2014.

Meanwhile, I'm not sure about the FUTURE of this FACADE since it seems
clearly marked for "No Patching, Future Demo." Does that mean
the wall is marked for demolition? Time will tell!

Linking to ABC Wednesday and City Daily Photo Blogs
Posted by Janet at 5:00 AM 18 comments: 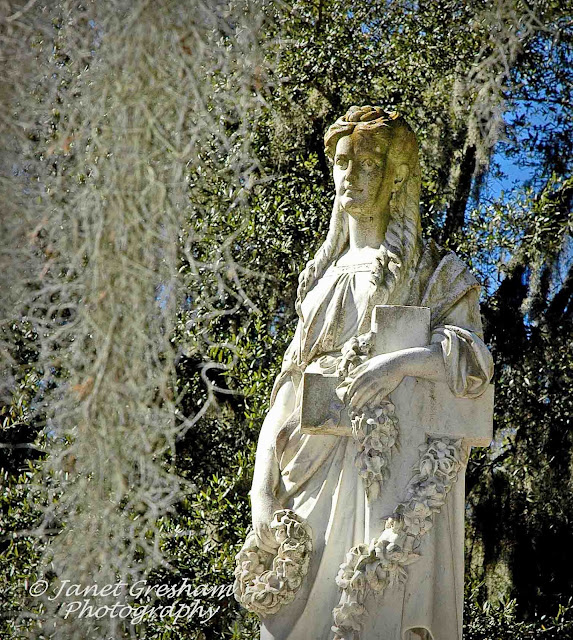 This year's Selma Pilgrimage guests are invited to Antiquing with Elodie,
a luncheon in an historic home on Dallas Avenue.The lunches on March 15 and 16
will include a menu of chicken salad, turkey/ham sandwich or grilled chicken salad.

Elodie (whose fine memorial is in Old Live Oak Cemetery) was  President Abraham Lincoln's
sister-in-law. Born in Kentucky in 1840, Elodie Breck Todd met her future husband,
N.H.R. Dawson, while visiting a sister in Selma. It is said that she and her sister
smuggled medicines and other supplies to the South after visiting Mary Todd Lincoln
at the White House. Elodie was active in other efforts for the Southern Cause,
including raising funds for the Confederate monument that stands in the same cemetery.
She died while only in her 30s, and her husband, who served as a Confederate officer
and later as U.S. Commissioner of Education, memorialized
his beloved Elodie with this monument. 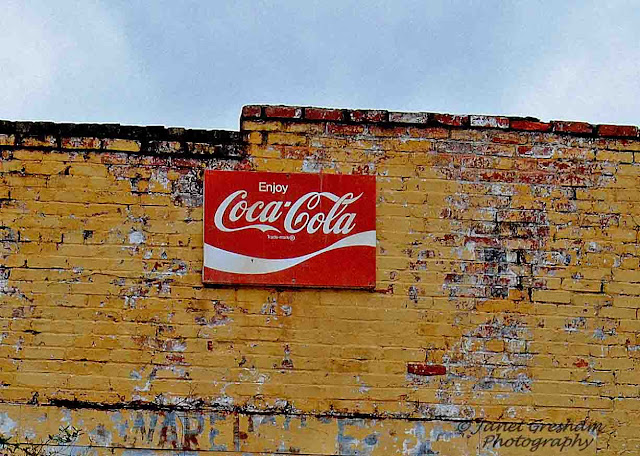 The bright red Coca-Cola sign contrasts well
with the old yellow brick building by the riverbank.

Linking to Monday Mellow Yellows and City Daily Photo Blog
Posted by Janet at 5:00 AM 15 comments: 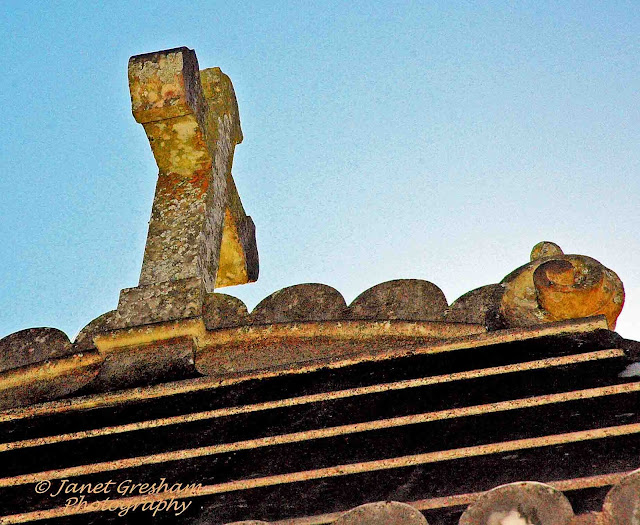 There are many crosses in Old Live Oak Cemetery, but this one escaped
my notice until a few days ago. This old weathered cross stands atop
what I call the angel monument in the Jones plot.

The cross is the universal symbol of Christianity, and the hymn,
"The Old Rugged Cross," is surely one of my favorites.

On a hill far away stood an old rugged cross,
The emblem of suffering and shame;
And I love that old cross where the dearest and best
For a world of lost sinners was slain. 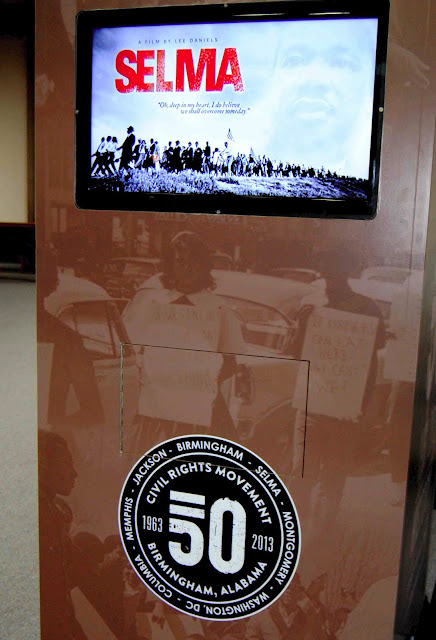 The exhibit stays in Selma until March 4 and will also travel to Washington D.C., Montgomery, Memphis, Jackson, Miss.; Memphis and Columbia, S.C. 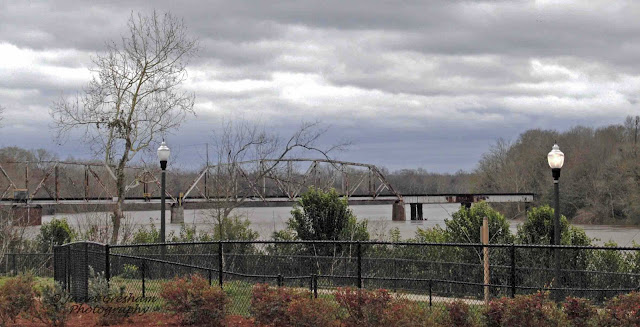 Nearing flood stage after seven inches of rain since Sunday,
the Alabama River in Selma made the railroad bridge appear
a bit short by Wednesday. Even after four days
of nearly constant rain, the skies still threatened.

Click HERE to see how high the bridge stands when the river level is normal.

Linking to Skywatch Friday and City Daily Photo Blogs
Posted by Janet at 5:00 AM 12 comments:

It's a Heart Thing 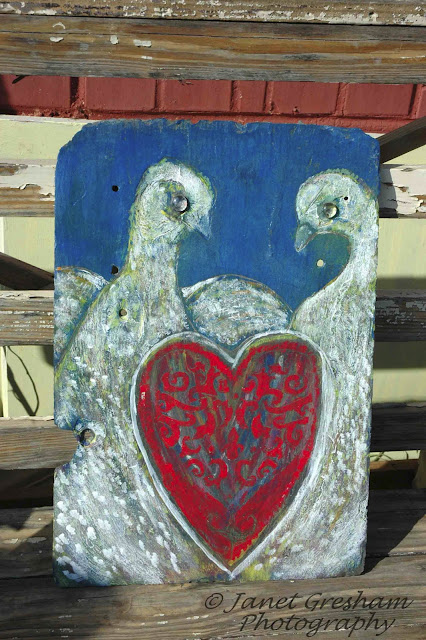 "The best and most beautiful things in the world cannot be seen or even touched.
They must be felt with the heart."
~ Helen Keller (1880-1968)

The artwork is done on slate from an old roof and is on display
at By the River Center for Humanity.

Email ThisBlogThis!Share to TwitterShare to FacebookShare to Pinterest
Labels: By the River Center for Humanity, heart painting on slate, Valentine's Day art 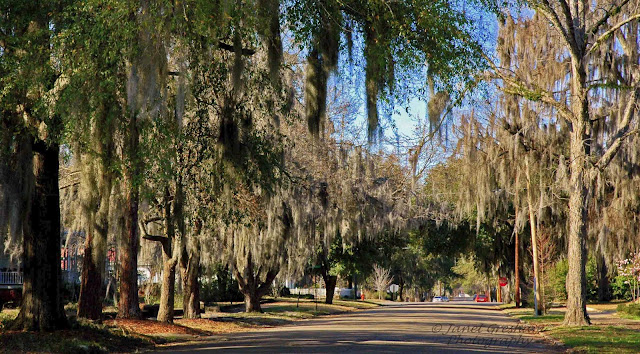 It's "raining" Spanish moss on this Selma street!

Really, you have to watch for falling Spanish moss along the sidewalk,
but that's just part of what makes Old Town so ENCHANTING.

Linking to ABC Wednesday where E is the Letter of Week
and City Daily Photo Blogs
Posted by Janet at 5:00 AM 11 comments:

The Pastels of Lauderdale 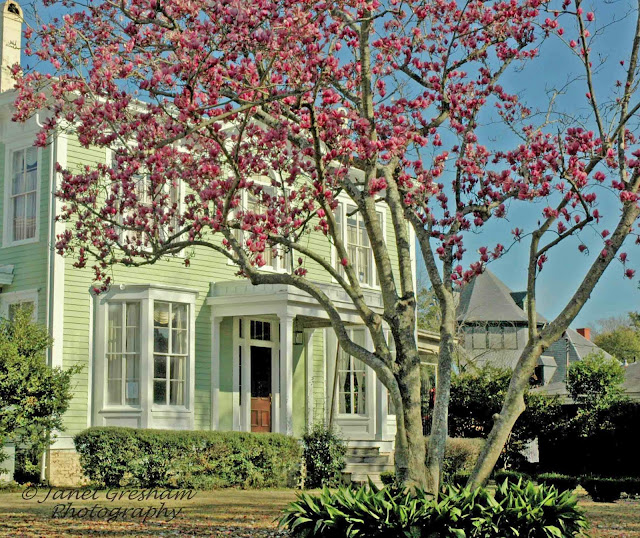 Spring seems to have sprung on Lauderdale Street, and the pink blooms
of the Japanese Magnolia do themselves proud
against the mint green house and turquoise sky.

This is the Ware-Baker-Jones House that was built around 1859
and became Grace Hall in 1985. Today, it once again is under restoration.

View more "tulip tree" blossoms over at Selma, Ala., Daily Photo's Facebook Page.
Posted by Janet at 5:00 AM 14 comments: 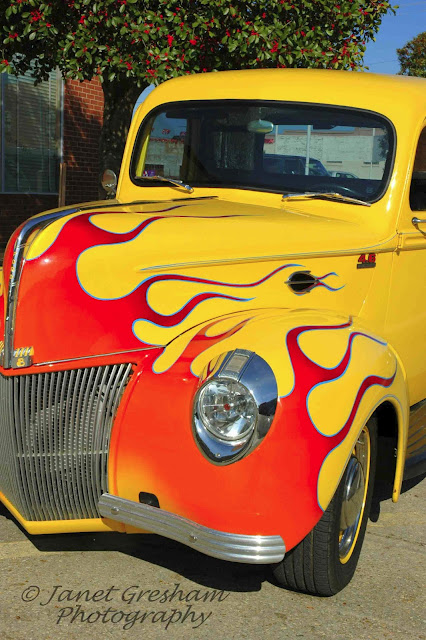 Excuse me...but your Ford is on fire!

This is a no-miss photo op, and if this vehicle could talk, I would love to hear its story!

You can view a picture of the whole vehicle at my Selma, Ala., Daily Photo Facebook Page.

Linking to Monday Mellow Yellows and City Daily Photo Blogs
Posted by Janet at 5:00 AM 17 comments: 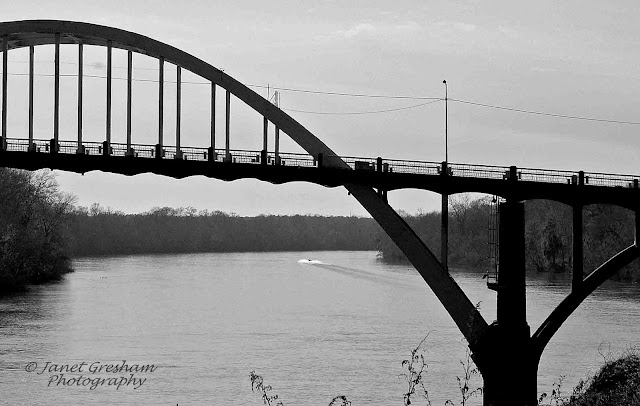 Selma basked in warm sunshine on Saturday, and the spring-like weather
not only brought bicycles to the sidewalks but at least one boat to the river. 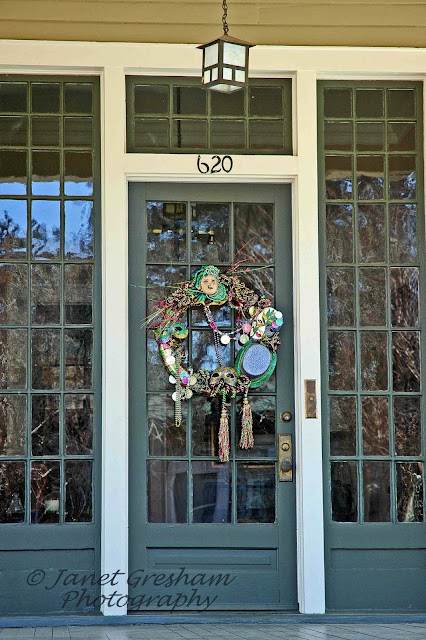 This front-door wreath has a little of everything that spells Mardis Gras.

I'm wondering who makes these wreaths and why Selmians are decorating
for the occasion! Several homes on Lapsley Street are decked out this year.
Apparently, this isn't just a coastal thing anymore!

Notice the reflections of the sidewalk trees in the entry glass! That's decorative too!

Linking to Weekend Reflections and City Daily Photo Blogs
Posted by Janet at 9:12 AM 5 comments: 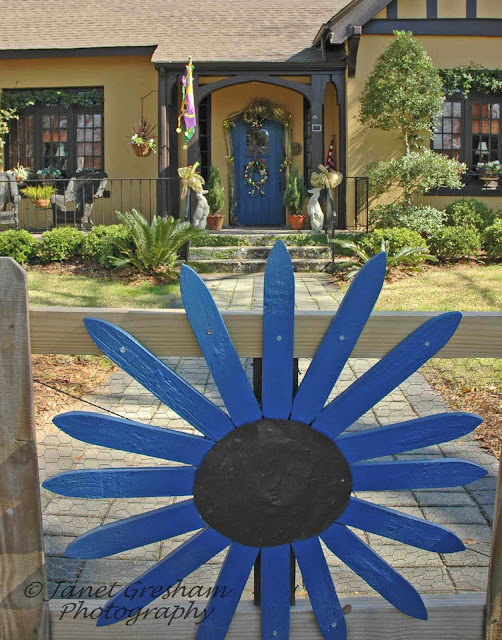 I am "nominating" this house and yard as "King of Selma's Mardis Gras Decorations."

The people that own this house just know how to decorate,
and I love this color blue for the gate and door decor.

Linking to Friday Fences and City Daily Photo Blogs
Posted by Janet at 7:07 AM 9 comments: 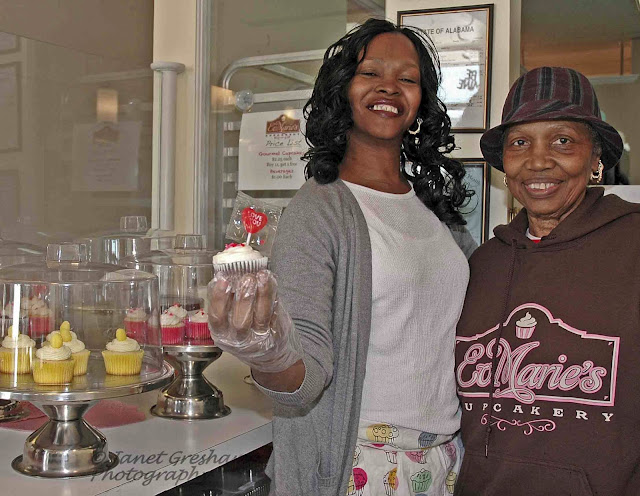 Valentine's Day is just a week away, and EvMarie's Cupcakery
on Washington Street offers an alternative to flowers and candy.
How about a chocolate cupcake with sprinkled frosting
and an "I Love You" lollipop on top?

Linking to City Daily Photo Blogs
Posted by Janet at 8:20 AM 13 comments: 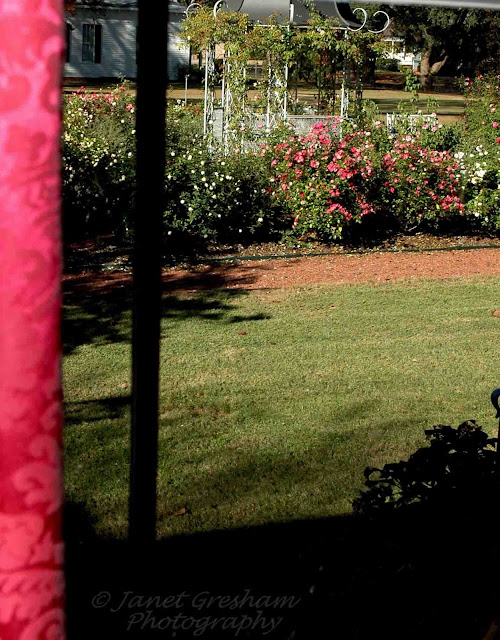 Roses are practically a year-round treat at Sturdivant Hall.

I took this photo last fall, and the gazebo surrounded
by rose bushes is a popular spot for pictures.

Linking to City Daily Photo Blogs
Posted by Janet at 5:36 AM 6 comments: 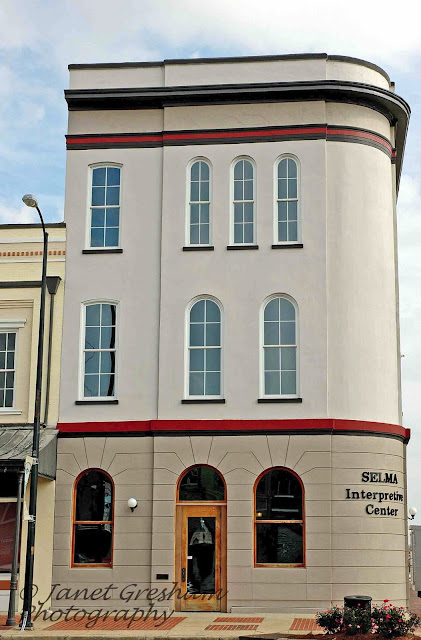 The Selma Interpretive Center for the Selma-to-Montgomery National Historic Trail
is housed in this renovated 1880 building on the corner of Broad Street and Water Avenue.
Formerly People's Bank & Trust, the structure's Italianate style
is demonstrated by the arched windows and curved corner.
Originally, it also had a two-story, wraparound cast-iron gallery.
After housing numerous businesses including a hardware store,
law offices and insurance offices, boards were removed
from the windows in  2010 for its renovation as the regional
civil rights visitor center operated by the National Park Service. 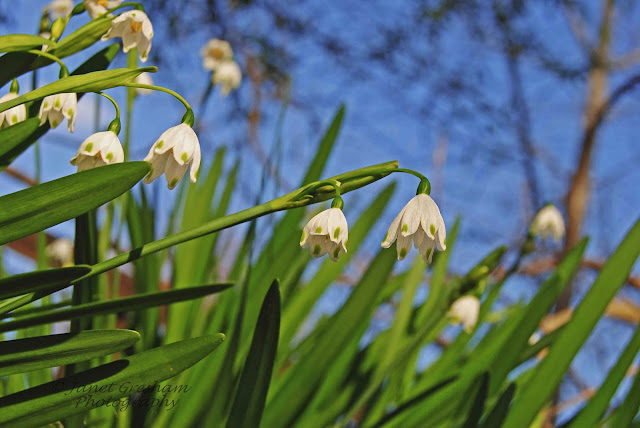 Snowdrops are here, and I've read that sometimes this early spring flower
doesn't even wait for the snow to melt before they pop up from the ground.
The snow thing doesn't really apply here, however, but it's nice to see
these beacons of warmer days by early February!

Linking to Macro Monday and  City Daily Photo Blogs
Posted by Janet at 4:34 AM 13 comments:

"Umbrellas" is the theme for February over at City Daily Photo Blogs,
and while I could have snapped open umbrellas in torrential rain
this past week, I chose an umbrella that shields the sun.

The bright yellow umbrella is from Selma's Plantation Patterns
and is located in Phoenix Park on Water Avenue. The photo was taken
in 2011 during the park's grand opening.

Linking to February Theme Day (CDPB) and Shadow Shot Sunday
Posted by Janet at 8:20 AM 5 comments: 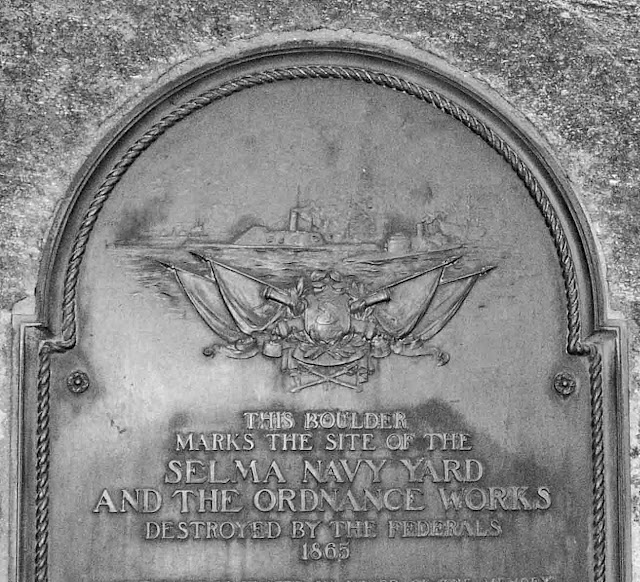 When you visit the Old Depot Museum, be sure and check out
the monuments on the property.

This one marks the site of the Selma Navy Yard and Ordnance Works,
which were destroyed in the  Battle of Selma, April 1865. The inscription
further reads that some of the largest cannon used during
the War Between the States were cast here, and the Battleship Tennessee
and other gunboats that took part in the 1864 Battle of Mobile Bay
were built here. 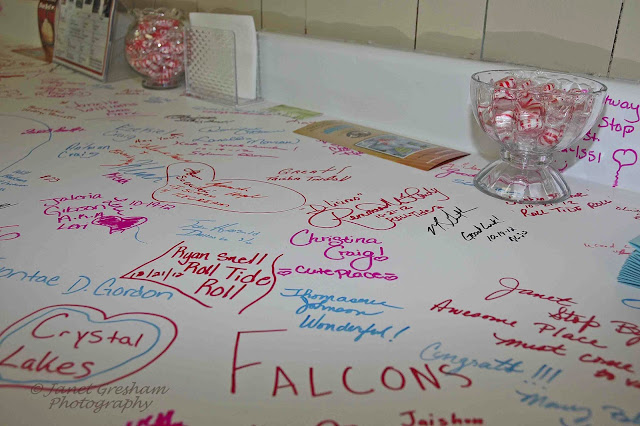 If it's February, then it must be time for sweets and hearts!
There are plenty of sweets at the Sweet Advantages Ice Cream Shop
on Lauderdale Street and plenty of customers' autographs too!