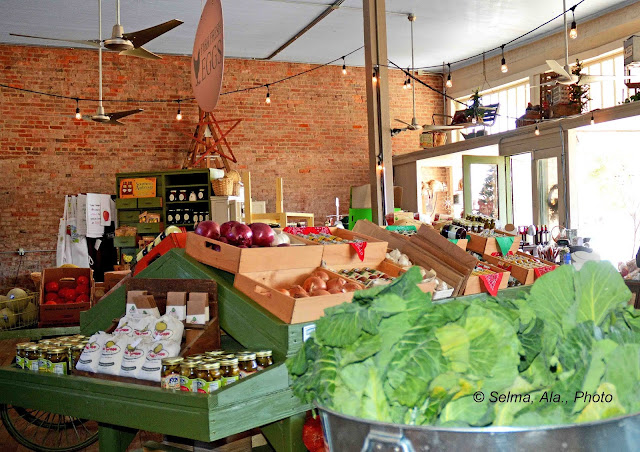 The Good Ole' Days are here again with markets buying local
so that we can eat fresh!

While we plant a few vegetables around the yard each spring,
we don't have room for great big, fresh-out-of-the-ground  greens
like these. The Orrville Farmers' Market has them though!

Linking to Our World Tuesday
Posted by Janet at 8:38 AM 1 comment: 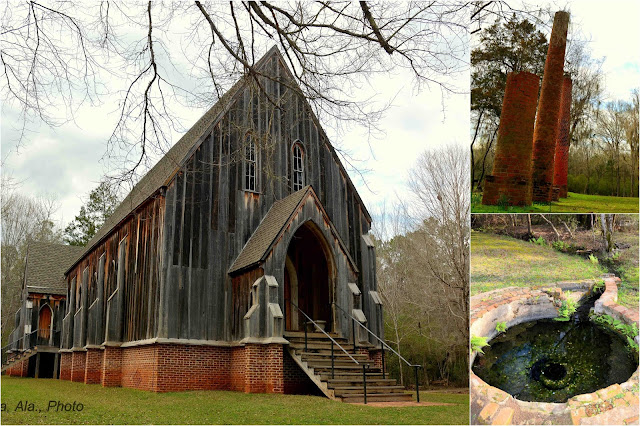 The archaeological park located at the confluence of the Cahaba and Alabama
rivers was best known as Alabama's first state capital (1819-1826),
but in the 16th Century, it served as an Indian village. Then, in the 1800s,
Cahawba became a wealthy town with some 3,000 residents.
During the War Between the States, a federal prison housed Union soldiers,
and after the war, emancipated slaves took refuge there.

Now a ghost town, St. Luke's Episcopal Church (recently moved back
to Old Cahawba) greets guests as they enter the park.
At right above stand brick pillars that are all that remain of the Crocheron home
and store that overlooked the rivers. Below at right sits the Perine
artesian well which furnished air conditioning to the Perine mansion.

Linking to Mosaic Monday
Posted by Janet at 6:50 AM 10 comments:

The Designers Behind the Exhibits 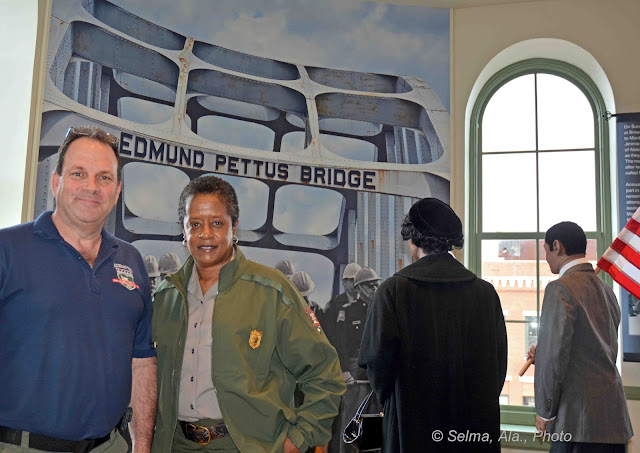 "We wanted to recognize not only the Courageous Eight
but other individuals as well," Byers said.
Woods built the background for the second-floor exhibit (shown in photo),
and Byers designed the Courageous Eight banners that hang
in the third-floor meeting room.
Save
Posted by Janet at 5:00 AM 1 comment: 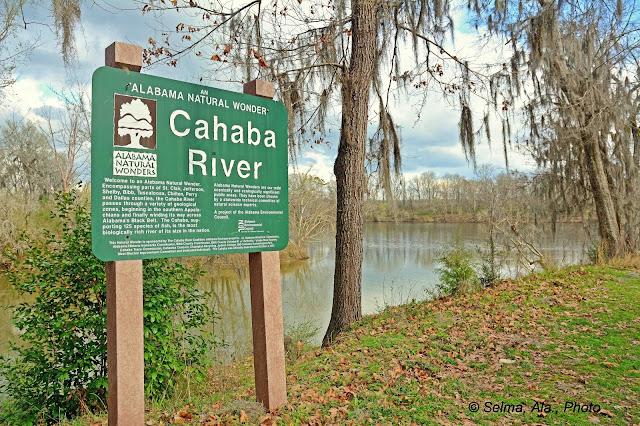 Here is where the Cahaba flows into the Alabama River, ending its long journey
from near Springville, winding its way into environmental science
as an Alabama Natural Wonder.

The free-flowing waterway is considered the most biologically diverse
in America and is home to 125 species of fish and rare plants
such as the Cahaba lily. 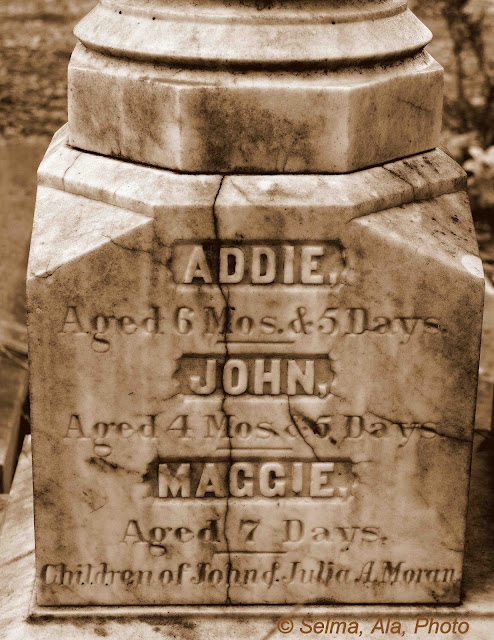 The  GRAVE markers in Old Live Oak Cemetery tell the heartbreaks
of yesteryear. They were the children of John and Julia A. Moran.

Linking to ABC Wednesday where the letter is G

On the Walls at Charlie's Place 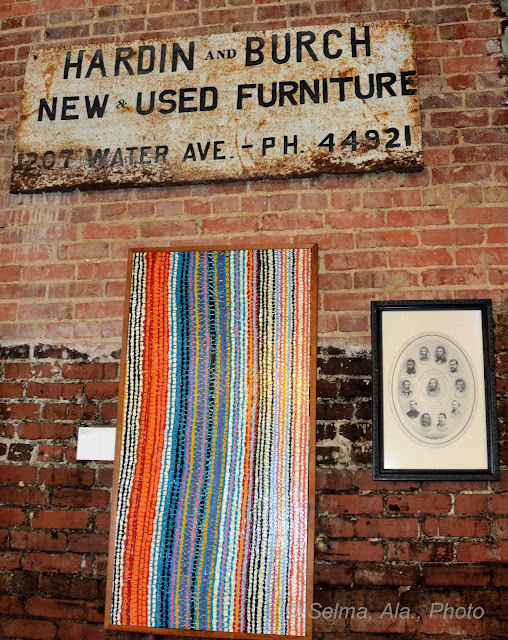 The decor at Charlie's Place is as good as the food!

Linking to Our World Tuesday
Posted by Janet at 8:57 AM 7 comments: 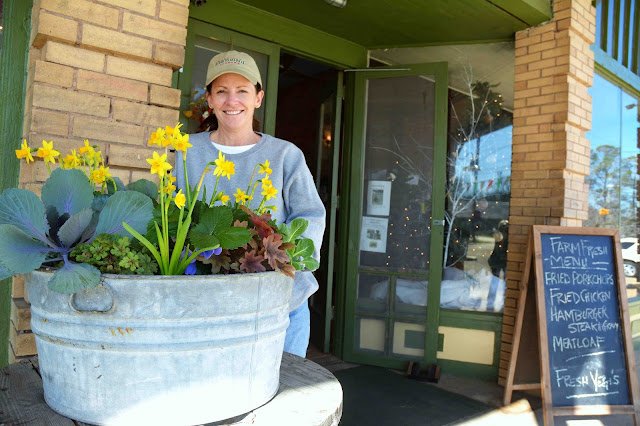 Proprieter Judy McKinney planted daffodils, pansies, cabbages and strawberries
in a barrel to welcome folks to the Orrville Farmers' Market.
The business sells seeds and plants, produce and gifts.
Her future plans include a kitchen/cannery for classes in canning,
breadmaking, soapmaking and more.

Linking to Monday Mellow Yellows
Posted by Janet at 7:09 AM 3 comments: 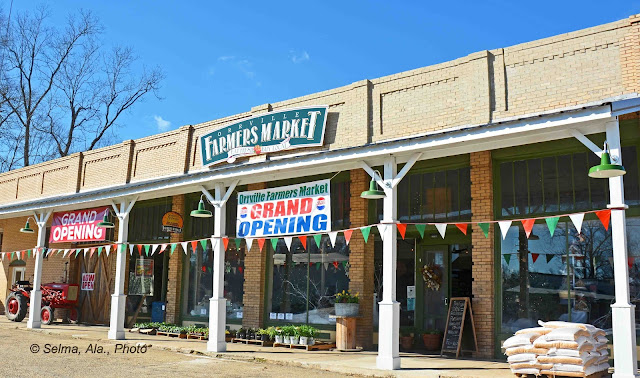 If you haven't experienced the Orrville Farmers Market yet,
well, head on down Highway 22!
This brand-new business between Selma and Safford
is far more than a produce market where folks can purchase
giant ripe tomatoes, huge homegrown cabbages
and Mississippi sweet potatoes.

But those things alone drew me in!

It's a hot-breakfast stop at 6 a.m. and a meat-and-three restaurant at noon.
It's where you go for seeds and plants and all things local or close-to-local
as in Alabama.  Try the goat's milk lotion and soaps
and the Marion Junction honey. There's a barrel of raw peanuts and pecans,
shelves stocked with jellies and jams and Rachel's Cinnamon Rolls.
There are T-shirts and cotton kitchen towels, country signs
and sacks of biscuit mix. And just a whole lot more!

Linking to Signs, Signs
Save
Posted by Janet at 5:00 AM 3 comments:

Lunch at the Library with Thom Gossom Jr. 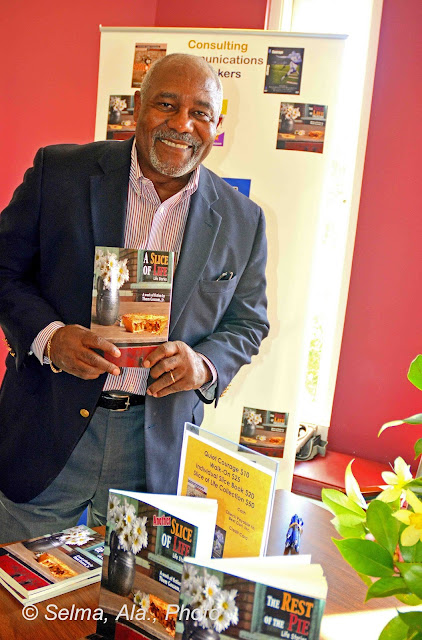 Heroes on the field but loners on the campus?

Certainly not me! But I was there during some of those years
and discovered Thursday that I even graduated Auburn on the same day
as Thom Gossom Jr. At AU, he was a walk-on football player
who achieved scholarship status and made first string.
And he became the first black athlete to graduate that university,
a feat he attributes to his parents' insistence for a solid undergraduate education.
As February's featured author at Selma's Lunch at the Library series, Gossom
reminisced about his days as a reluctant pioneer of integration in the New South.
He went on to a brief career in the NFL followed by public relations, acting
and writing. The Birmingham native appeared in such television shows
as "Boston Legal," "In the Heat of the Night" and "NYPD Blue."
There were also a few films.

But yesterday, his amiable personality connected with a full house
as he mostly focused on football and how he finally made amends
with the emotions that threatened to throw him off course during his his younger
years. Gossom signed copies of  his autobiography,
"Walk-On" along with his "Slice of Life" short story collections. 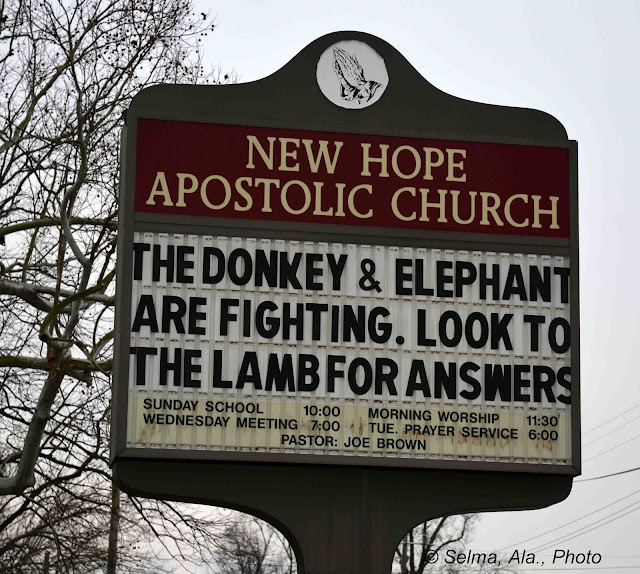 New Hope Apostolic Church in Selma offers some advice
for the contentious change in U.S. administration. 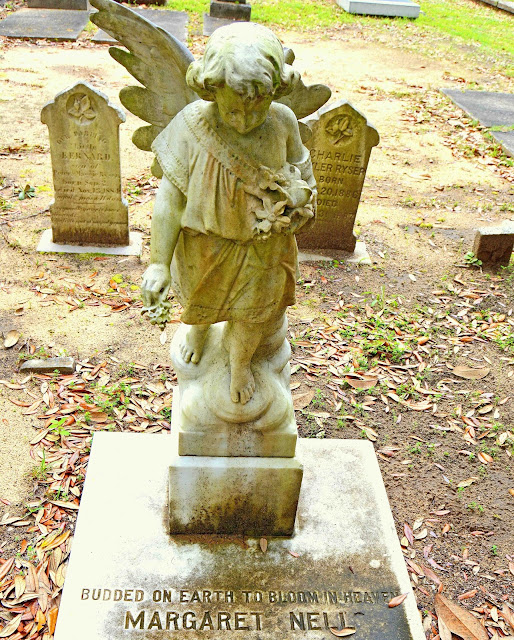 "Budded on Earth to Bloom in Heaven" reads the epithet for little Margaret Nell.
The many graves of children in Old Live Oak Cemetery reminds us how fragile life
is and certainly once was for the very young. 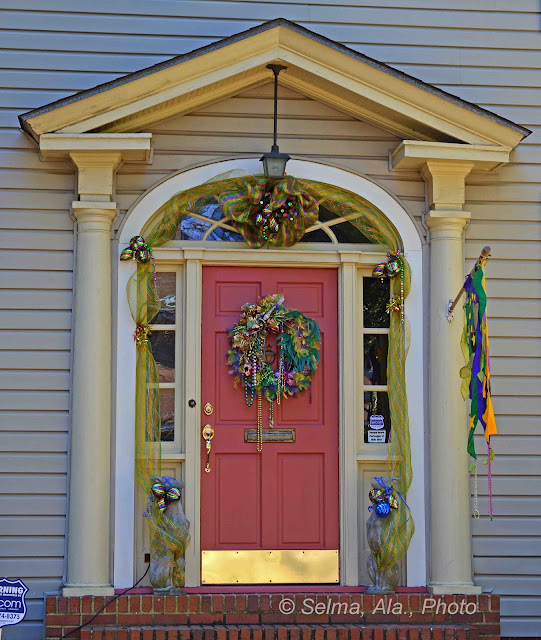 Fat Tuesday isn't until Feb. 28, but the Mardis Gras celebrations down south
in Mobile begin this weekend. And while Selma isn't particularly known
for this event, there are a few places around here that decorate.
These homeowners have quite the colorful touch!

Dance of the Daffodils

In the words of William Wordsworth, I do believe these daffodils
are "tossing their heads in sprightly dance!"

No matter how bare the branches or how gray the sky,
we can always count on February daffodils to remind us
that the groundhog was wrong!

Linking to Monday Mellow Yellows
Posted by Janet at 7:19 AM 2 comments: 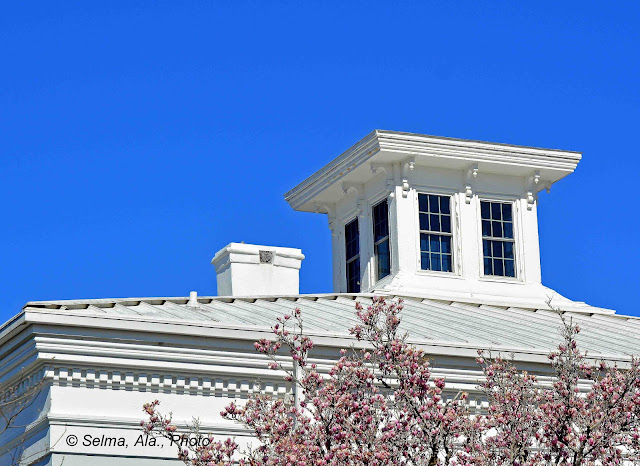 Selma has enjoyed blue skies, flowering Japanese Magnolia
and spring temperatures this past week, and here is a peek
at the top of Sturdivant Hall. What a magnificent view
that must be looking down! The antebellum Greek Revival house
museum is located in Old Town Selma.

Linking to Skywatch Friday
Posted by Janet at 8:21 AM 6 comments: 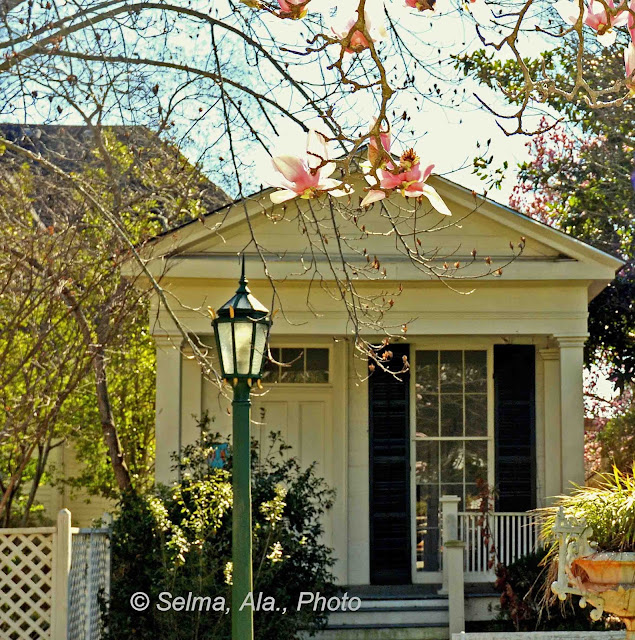 This 1800's McKinnon-Riggs doctor's office in Heritage Village preserves
not only the building but medical equipment and furnishings.
It will be open during Selma's Historic Pilgrimage March 17-18.
The office was moved in 1981 from Pleasant Hill to property
owned by the Selma-Dallas County Historic Preservation Society
and is located near Sturdivant Hall.

The light in front was an original on the Edmund Pettus Bridge
and used from 1940 until about 1960. 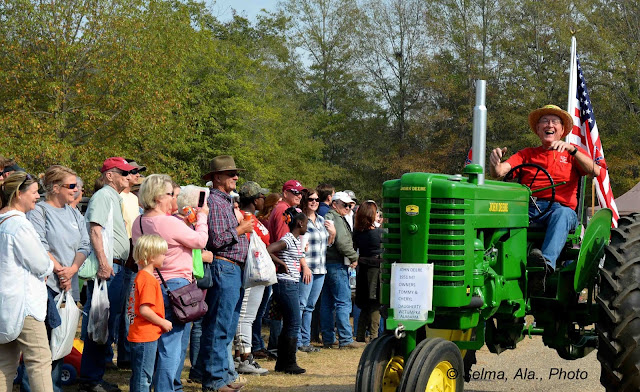 The tractor parade at the Orrville Tractor Show always attracts a crowd,
and this driver and the onlookers are loving it! The tractor show is held
in November, but I held this photo over for the "LOVING LIFE" Theme Day
at City Daily Photo blogs.