The Hole That was Once a Row 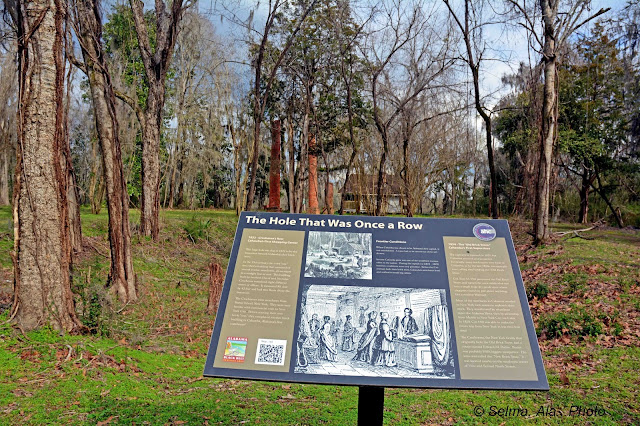 We are back at Old Cahawba Archaeological Park at the site of the town's
first "row" built in 1822. A row was a predecessor to the shopping center,
and the big hole behind the sign was once the basement of a building
that housed eight stores and offices.

Built by the Crocheron brothers, merchants from Staten Island, N.Y.,
the row was similar to those in New York City. But before the brothers
built this "mall," they built Alabama's first statehouse in the center of town.

This building later became known as "the Old Brick Store."
Store owners from Cahawba purchased their merchandise from New York
and traveled to market via the Alabama River to Mobile,
then by steamship to Cuba and north to New York.

The Crocheron Columns (all that is left of the brothers' house)
can be seen in the background along with a more modern river house.

Linking to Signs, Signs
Posted by Janet at 5:00 AM

Email ThisBlogThis!Share to TwitterShare to FacebookShare to Pinterest
Labels: Crocheron brothers, Crocheron Columns, ghost towns of Alabama, Old Cahawba Archaeological Park, The Hole That was Once a Row

I love to find historic signs like this one.

You'd be hard pressed to imagine stores in such a location!

William Kendall, Nowadays, yes! But back then, it was a prime location, like being off two main exit ramps (the two rivers) at the state capital!

That is most interesting. I've heard of other merchants from New York that headed to Alabama back in the good ol' days.