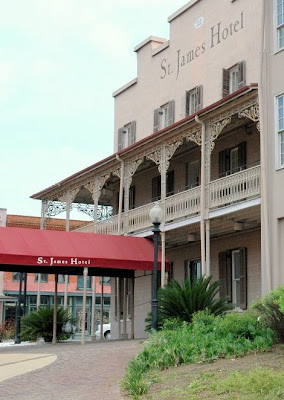 Union troops slept here.
It seems those Yankees had headquarters all over town when they took Selma during the final days of the War Between the States. Back then, in 1865, the St. James Hotel was known as The Troupe House. Today, it is said to be the only existing antebellum riverfront hotel in the Southeast.

Between then and now, however, this structure was a bit of everything, including a tire-recapping company. A public/private partnership funded extensive renovation, and the structure reopened as a hotel in 1997. The ballroom, which opens onto a terrace overlooking the river, is used for parties, weddings, banquets and reunions.

While legend has it that outlaw Jessie James also visited here, I think its most interesting moment came during the "War of Northern Aggression" when the owner went off to fight. He left his slave, Benjamin Sterling Turner, in charge of the hotel. After the war, Turner opened a livery stable and became wealthy. In 1870, he was the first black Alabamian elected to Congress where he worked for amnesty for the Confederate leaders and civil rights for the black race.

Gosh. The photograph is tops. But the narrative is superior. You should at least be writing a weekly column for a local newspaper. I do that every week and have reams of stories and most are my own experiences. Like my father's "Money Sack." That's a story I don't understand how to show on the DPB network.

And, thank you for your visits to my blog. I appreciate seeing your name and comments there but sometimes I just can't get caught up.

Thanks for the bit of history. Interesting stuff

Abraham, thanks for your encouraging words. I believe you get around the DPB more than any of us, and that is quite a challenge!
I did write for the local paper a long time ago but freelance now.
I think it would be fun to write a column like "The Qwill Pen" by Qwilleran in "The Cat Who..." mystery book series.

The hotel is beautiful and it's pleasing to read that someone was prepared to fund the renovation. It would have been a shame to have lost it.
Very interesting narrative.
Angela

That looks pretty historic. Up to now I didn't know Selma, but now I'll get to know :-)